Net phone services. Are we there yet? 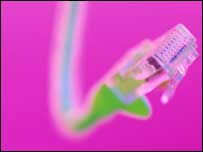 Net phones is a new trend based on the VoIP (Voice over IP) technology. In a few words, the Internet (and any other ethernet network) is used to make and receive calls. That way, the traditional land lines are circumvented and your voice is encapsulated in IP packets travelling through your ISP's network.

At first, things were complicated since you needed a computer, a sound card and of course a headset (microphone, speakers). Lately, ordinary-looking telephone devices have appeared supporting VoIP. All you have to do is plug them in an ethernet network (like you have to plug your regular phone in the telephone network), pick up the receiver and dial the destination number.

Although all this sounds so great and has many advantages, it seems that the world is treating it like beta. Why?

BBC Technology News has an interested article on the subject. It points out the benefits such as low-cost international calls and ease of use but also presents as drawbacks the lack of efficient interconnection between VoIP providers, people's difficulty to adopt a new technology and the fact that such networks cannot substitute lands lines entirely.

First of all I too see the problem with many providers and no solid interconnection agreement. At the moment VoIP phones are used inside small networks (companies, wireless metropolitan networks, etc) with great success but, when it comes to placing a call between cities or countries, the current potentials are limited. That's quite sad because modern people demand a highly extended network when it comes to their communication.

Secondly, the so called "difficulty to adopt" really doesn't exist. The BBC article argues that you need a PC with multimedia capabilities to join a VoIP network. As I have already mentioned, this is not true. Making VoIP calls is as simple as picking up the phone. In my opinion, it is the fear against the unknown. And that fear exists in the absence of information. That information is not provided and will not be easily provided either since traditional land line providers will loose big if VoIP goes massive.

Finally, the argument that land lines cannot be substituted entirely is a false one. The main point of defence is that land lines work in case of a power failure or any other emergency situation. Who are we kidding? In 99% of emergencies the first things to crash are land line and cell phone networks.
On the other hand, the Internet (aka ARPAnet) was designed specifically to withstand catastrophic situations up to a nuclear disaster. Although in most cases there is only one backbone line for the telephone network, IP packets can be routed through many different paths providing highly viable communication networks. If there's one human achievement that will die last, that is the Internet. An international web of nodes linking one place with another in so many ways. Also, wifi networks (aka ethernet goes airborne) can be deployed within minutes after something unpredictable has happened and provide high-quality, reliable communications. The military (which has already designed the ARPAnet) is investing in such rapid-deployment wifi systems. And if the military relies on this technology when operating in the desert or in the jungle, wouldn't you rely on it at home?

In the end, Net phone services are the absolute champion and anyone who thinks otherwise is simply avoiding to look forward. So... stand by, we're almost there!
at 6:40 PM